It is so difficult to know how long we will be "socially distancing" and adhering to state and CDC recommendations.  But I do know, that our demographics of the Over the Hill Hikers puts us in a category to be cautious and apply our collective wisdom.  So, in saying that, I am putting our start of the official 2020 hiking season "ON HOLD" until we get an "all clear" from Governor Sununu and other health officials.

I realize that we will likely continue to enjoy the beauty of our "backyards" whether on a local neighborhood walk, or on the mountain or hill just down the road so long as we are able.  Perhaps you will be solo, or with a friend or two while keeping an appropriate distance.  But it is best for us to put the organized hikes aside for now.  I appreciate your understanding.  We will continue to work on our 2020 hiking season schedules, and as we learn more, additional emails will be sent out.


Posted by Over The Hill Hikers at 5:21 PM No comments:

On Wednesday, March 18, Larry and Doug hiked to Whiteface (4019) and Passaconaway (4043) in the Sandwich Wilderness. The weather was superb; bright blue sky, no wind, temperature in the mid to upper 30s. We started from the parking lot on Ferncroft Road, hiked up using the Blueberry Ledge Trail to the Whiteface summit, across the ridge along the Rollins Trail to the Passaconaway summit and back down on the Dicey's Mill Trail. The trail had plenty of snow that was fairly well packed down. As long as we stayed on the center of the trail we didn't post hole.

The only issue we had was that the snow would clump together under the micro spikes. Sometimes there would be 4 to 6 inches of snow stuck to the bottom of our hiking boots. It made for slow and uncomfortable hiking until we were headed down and could take the spikes off. We want to ask the more experienced expert winter hikers if there is an alternative.

The views were superb. From the ledges on Whiteface, everything to the south was visible. Ossipee Lake, Winnipesaukee, the Belknaps including Gunstock, Ragged Mtn., Sunapee and Tenney Mtn. ski areas. Other vantage points provided views of Washington and the southern Presidentials, the Wildcats and Carter Dome and Chocorua.

The four pictures below were all taken from near the summit of Passaconaway. The pictures scan from the west, to northwest to north.

The picture below looks toward the west. From left to right are Sandwich Dome, Jennings Peak, Waterville Valley ski area and Tecumseh. 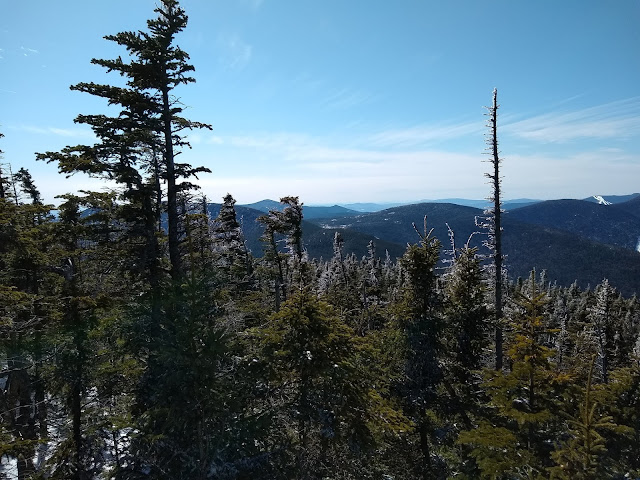 The picture below looks toward the northwest. From left to right are Waterville Valley and Tecumseh in the background and the three Tripyramids in the foreground. If you zoom in near the Middle Tripyramid, the snow capped summit of Moosilauke is just barely visible. Behind the North Tripyramid are the Osceolas. 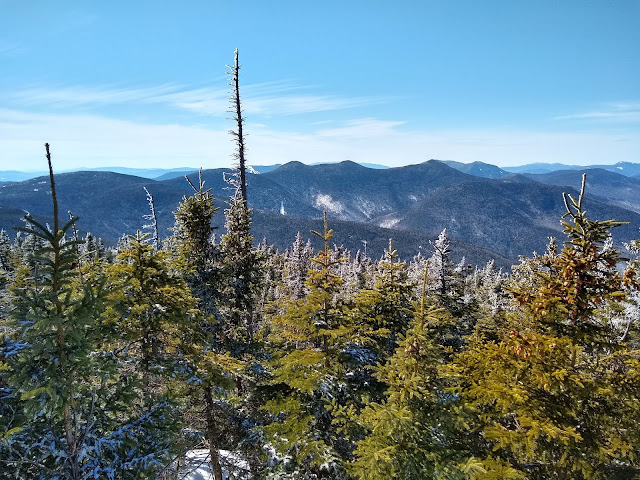 The picture below also looks toward the northwest. From left to right are the two Kinsmans, the Flume and the snow capped Franconia Ridge. Owls Head is below Lafayette and Garfield is to the right of Lafayette. The last summit to the right is Carrigain and then the Signal Ridge. The Bonds, the Twins and the Hancocks might be visible in between Garfield and Carrigain but are difficult to pick out. 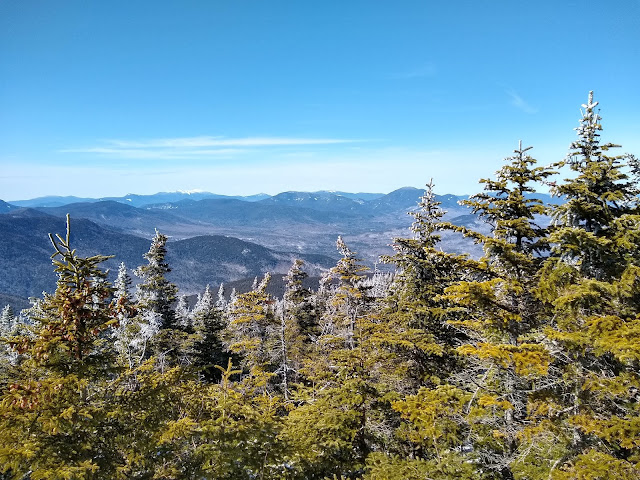 The picture below looks toward the north. From left to right are Carrigain again, Webster (above the Webster cliffs), the snow capped dome of Eisenhower and of course Washington. 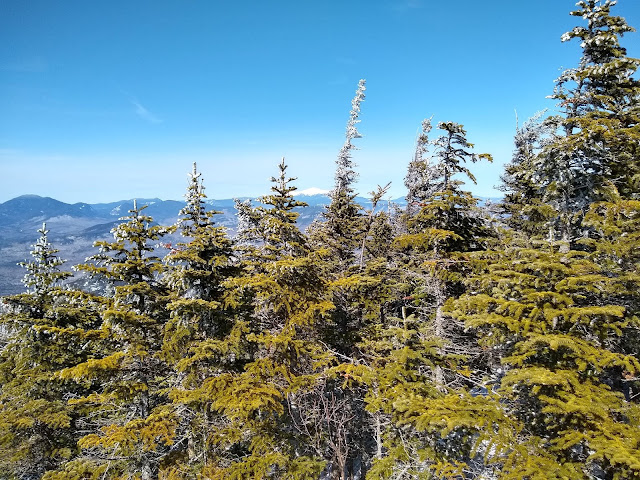 Since Friday March 20 marks the first full day of Spring, this hike was our last "official" winter hike. We intend to continue hiking in April so please contact Doug if you are interested.

Posted by Over The Hill Hikers at 9:30 PM No comments:

Our snowshoe events are very popular, so our group size has been limited, but those that are able to join us have a great time.  The locations always impress us, but mostly the soup and goodies following are the hit of the day.  Thank you to all that are a part of this, from the hosts, coordination, and planning, it's all so appreciated. 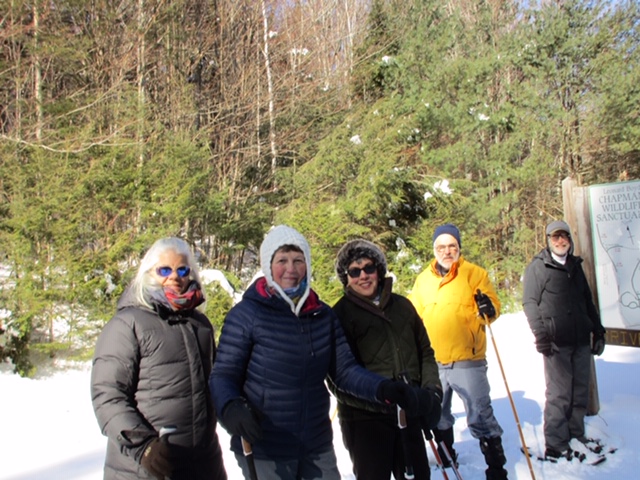 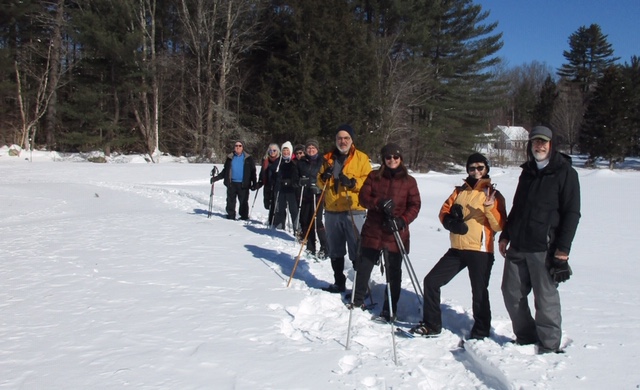 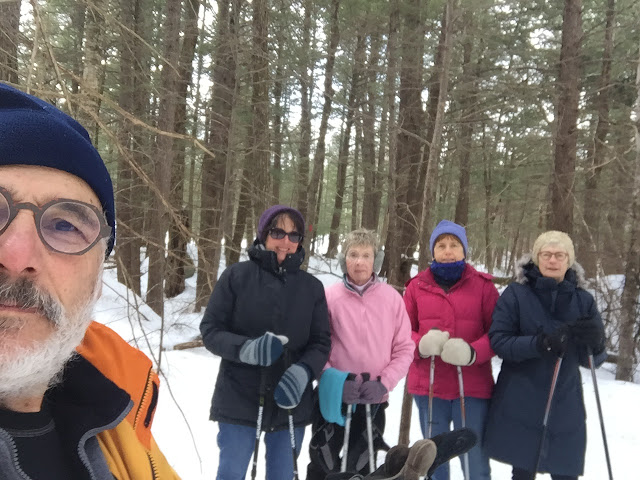 Posted by Over The Hill Hikers at 5:37 PM No comments:

getting started at winter hiking

A few Over The Hill Hikers are getting started with some winter hiking. If you are interested in winter hiking, please email Doug or Tracy.

Here's some photos from our recent trip (January 7th) up Mt. Roberts. We had a couple inches of fresh snow overnight, but the earlier hikers had packed down the trail for us, so it was smooth sailing up to the top. 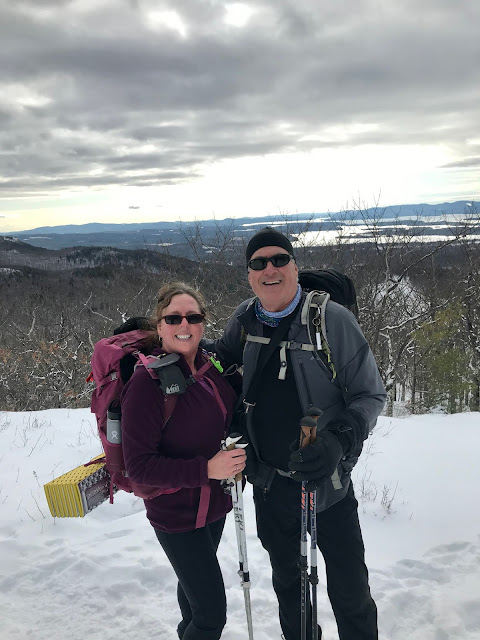 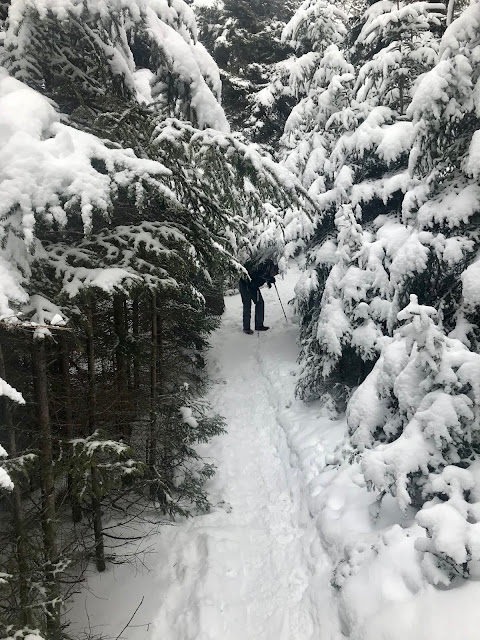 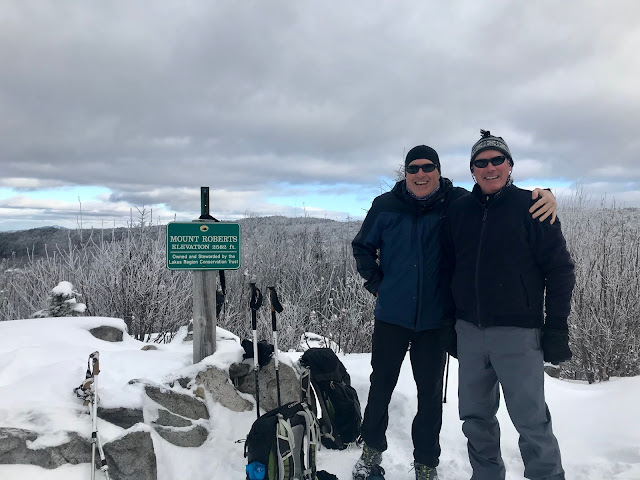 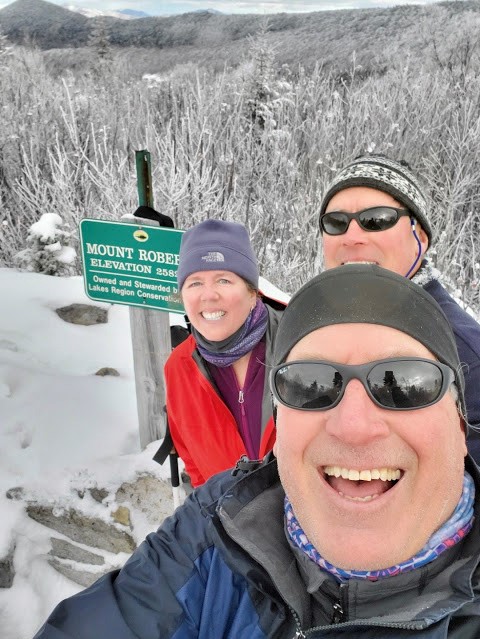 Ruth Stuart did a lovely job kicking off our 2020 Snowshoe and Soup season.

A strong interest in these events has lead to the necessary steps to become a first come first serve outing, limiting the group size to allow for enjoyment of the hike, and to accommodate our hosts home space and cooking plans.  Thank you in advance for your understanding, and for supporting our hosts!

If interests continues to remain strong, we may look to more volunteers to lead a second snowshoe! 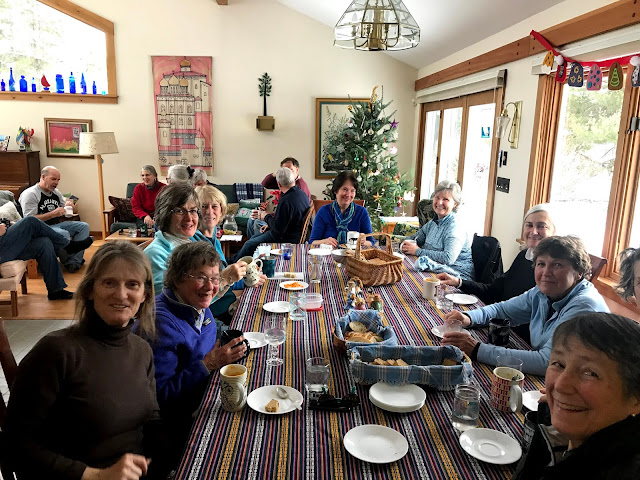 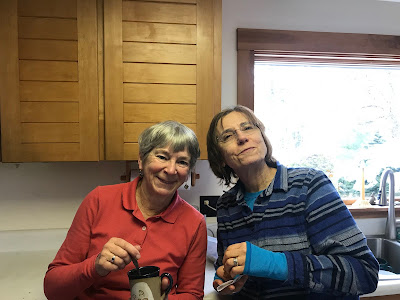 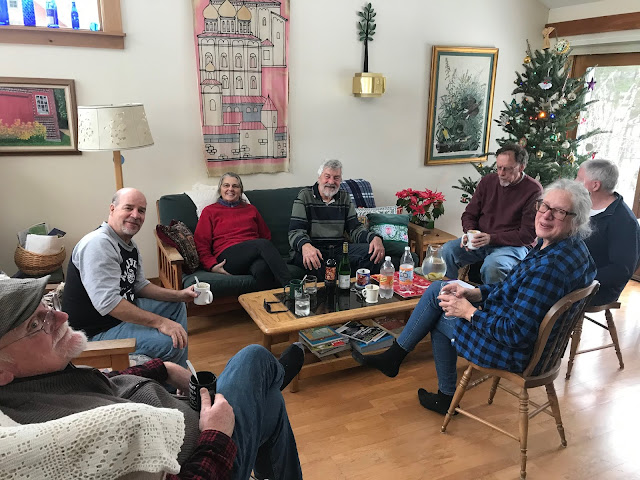 Larry and Doug took advantage of a mild winter day and hiked 4003 foot Tecumseh. The trail was hard pack snow and ice, no need for snow shoes but micro spikes were required. The weather was cloudy then clear, with temps near 30 and winds near 20 mph.

We intend to do more winter hiking so if you are interested, please let Doug know.

Below, Larry and Doug are at the summit of Tecumseh. 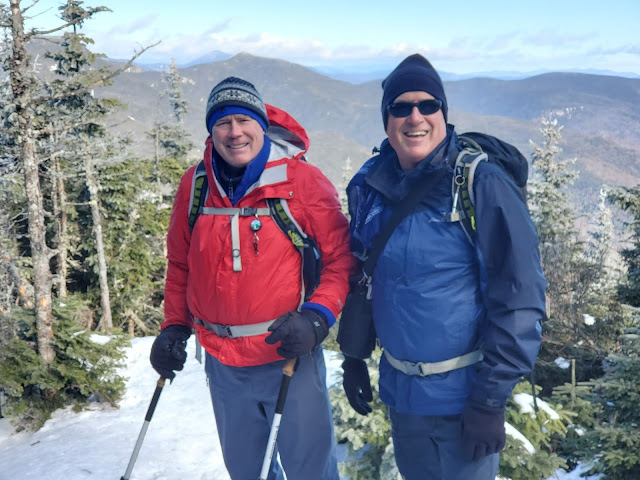 Below, Larry is trying to get a ride up the mountain on a chair lift. He didn't have a lift ticket so didn't get very far. 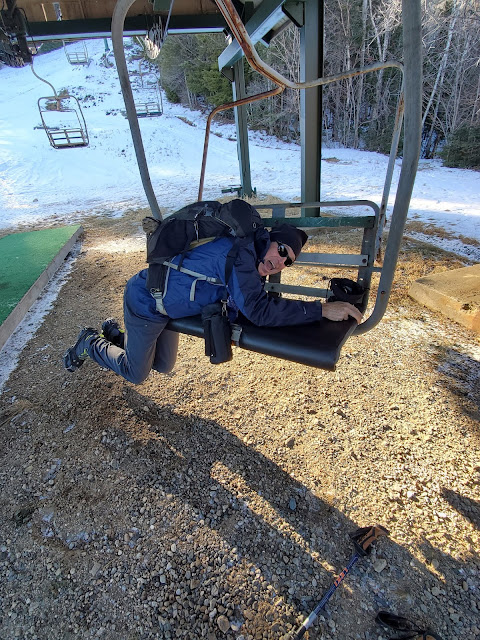 I thought I'd share this with the rest of the OTHH members a small "redlining" goal I recently met.

After hiking #39 of the 52 With a View, and #33 of the 48 4000 footers
in the past 18 months, Moose and I just couldn't bare heading north on Columbus Day weekend with all the leaf peepers. He had never done any hiking in the Belknap Range, so we thought we'd give it a try.
We loved it so much, we set a goal of redlining the 67 miles of the Belknap Range AND having it done by Veteran's Day. Today we completed our goal, so I thought I'd pass along these photos of Moose and I.

If anyone wants to see more photos of our adventures they can send a Friend Request on
Facebook to WM MOOSE. They can also see where we've been by checking New England Trail Conditions website, we post under the name of 'David and Moose'. 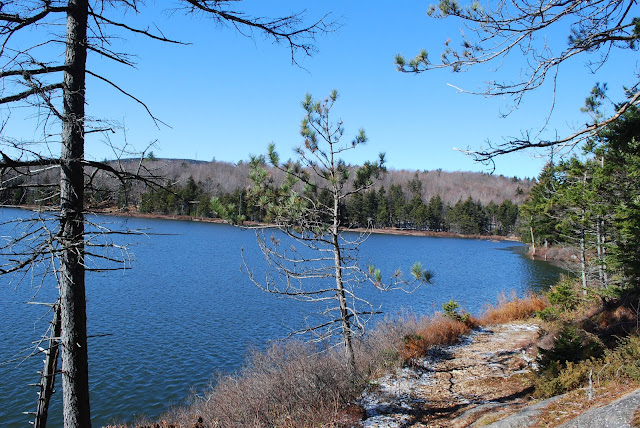 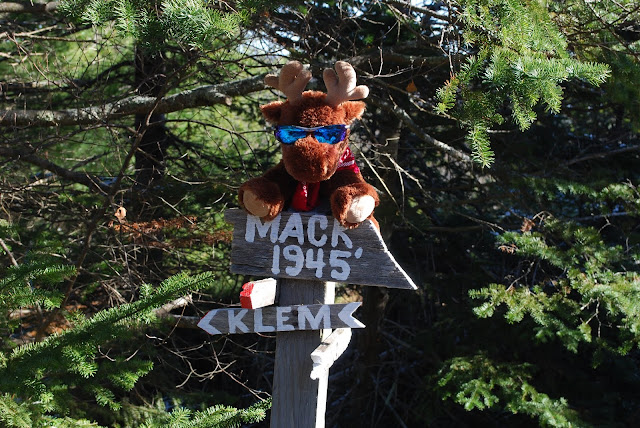 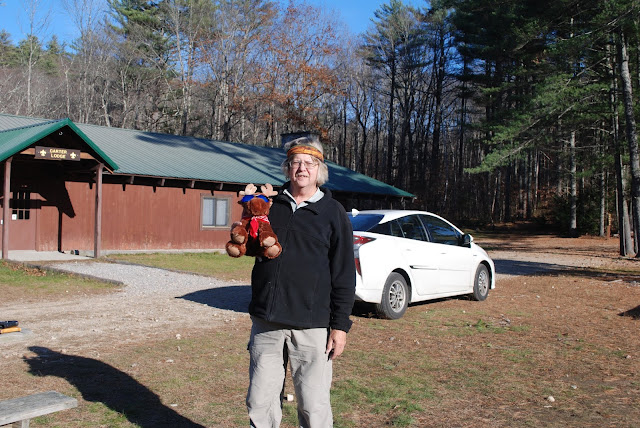 Posted by Over The Hill Hikers at 4:01 PM No comments: