September hiking doesn’t get better than this: Beautiful weather for a moderate hike on Bald Knob in the Ossipees. We took the Bald Knob Cut Off going up—a little rough and slippery after heavy rain the night before— and took an easy, slightly longer hike on the Turtleback carriage road heading down. There were nine of us: Elaine Vazanna, Shirley Stanek, Christine Wright, John Robbins, Cheryl Ouelette, Betty Heaney, Kathy Thorndike, Deb Guyer, and hike leader Jean Knox.
All in all, a terrific day! 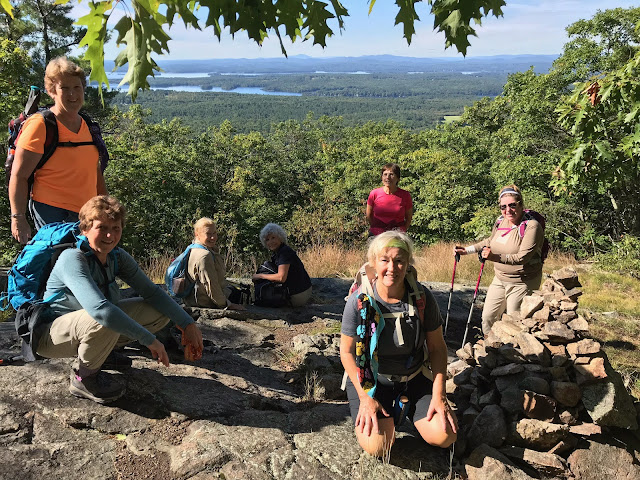 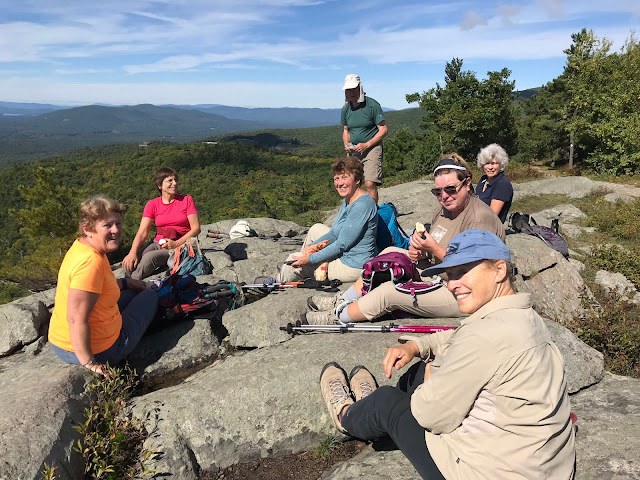 Posted by Over The Hill Hikers at 7:59 AM No comments:

7 braved the cold windy morning to paddle squaw cove then around Hoag Island. It was a successful, and dry last outing for the season. 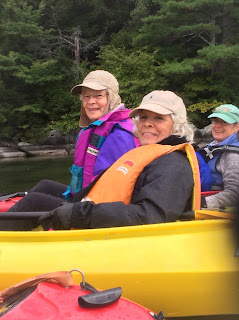 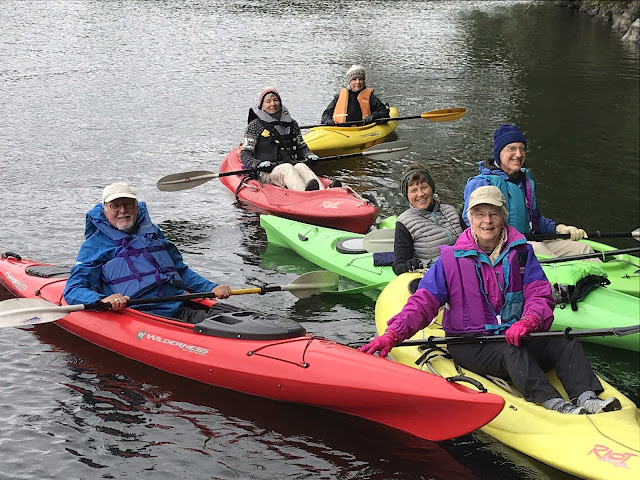 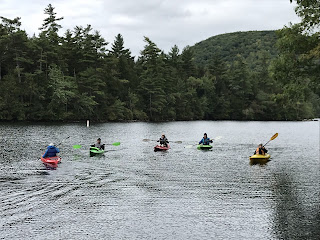 Posted by Over The Hill Hikers at 8:52 AM No comments:

Wow, the OTHH kayaking group is still getting out there and it's the end of September!  Impressive! 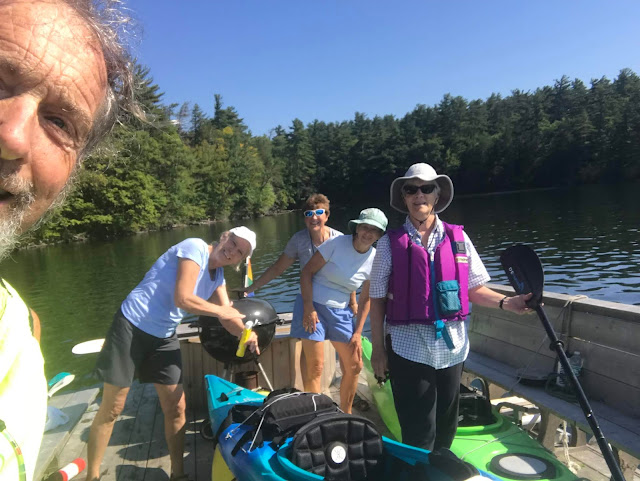 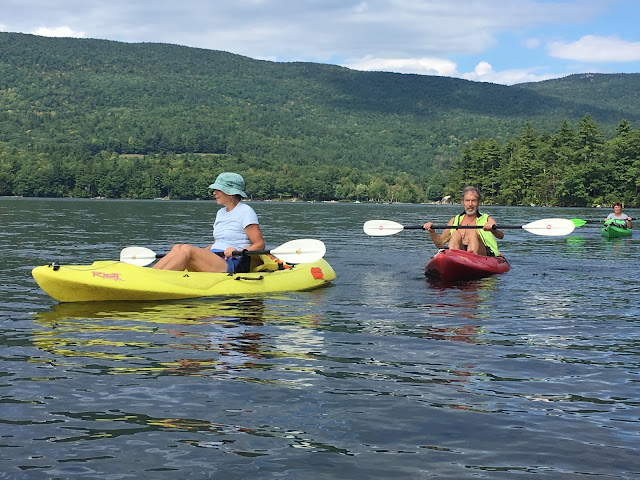 Posted by Over The Hill Hikers at 6:04 PM No comments:

Our OTHH matriarch, Sue Speers,  and her granddaughter, Nellie, were accompanied by Jane Harrington, Judy Ryerson, and Betsy Loughran up Mt. Williard on Sept 17th.  We started in the rain from Sandwich, but by the time we got to the top we had perfect sunshine.  The view down the valley was spectacular and even Mt. Washington was out of the clouds. 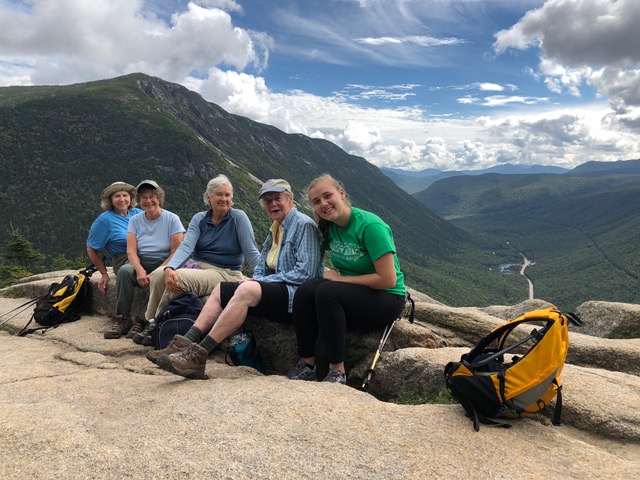 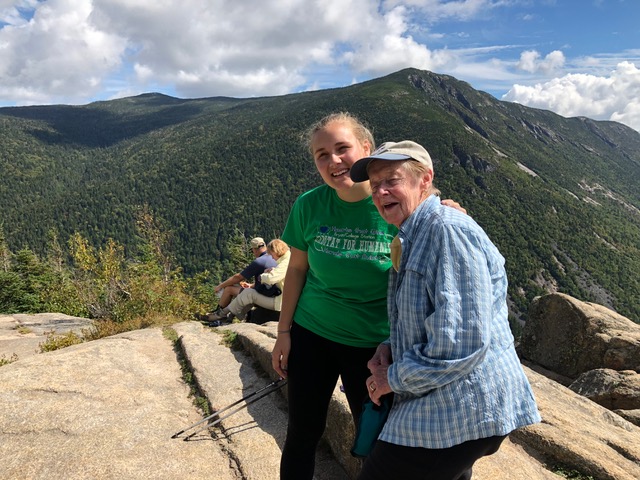 Posted by Over The Hill Hikers at 9:53 PM No comments:

6 of us hiked the steep climb up the Davis Path trail to Mt. Crawford.  What a doozy of a climb!  The view was very limited due to the low clouds / fog, but the mist felt refreshing.  After a bit of lunch, we made our way over the nice (and gentle) trail to Mt. Resolution.  We were never really sure of the summits for either mountain, as signs and survey markers weren't easily found.  But, once we started to go down hill, we thought we might be on our way to Parker, which was not in the plan for that day.

The hike was great.  A challenging trail, but a rewarding one.  I look forward to going back to get Stairs.  There just wasn't enough time in the day to get all three. 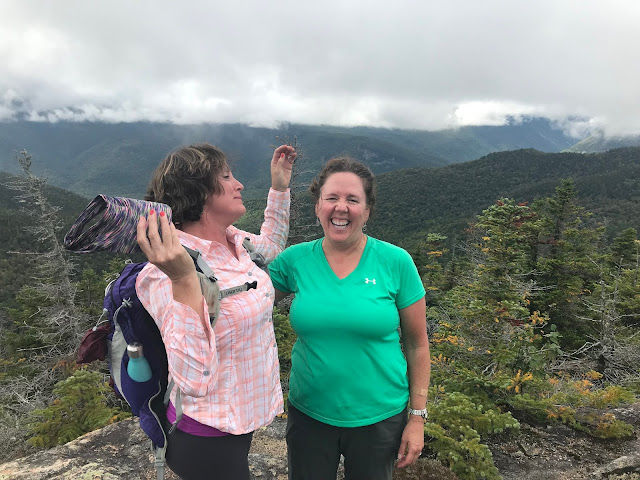 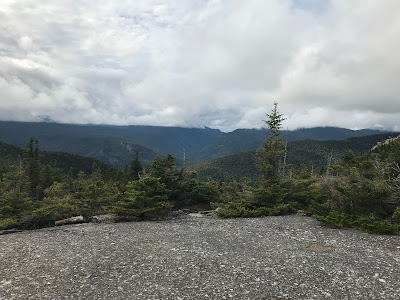 Posted by Over The Hill Hikers at 6:09 PM No comments:

Ellen, son Derek, John, and Dick hiked in to the AMC Zealand Falls hut, then up the Twinway and over to Mt Zealand. That made it #47 for Ellen for her eighth round of the 48 and also her over-70 round. Below are three of us at the treed summit (pic by Derek). Then you see Derek, Ellen, and John back at Zeacliff, with the nice view of Zealand Notch behind them. 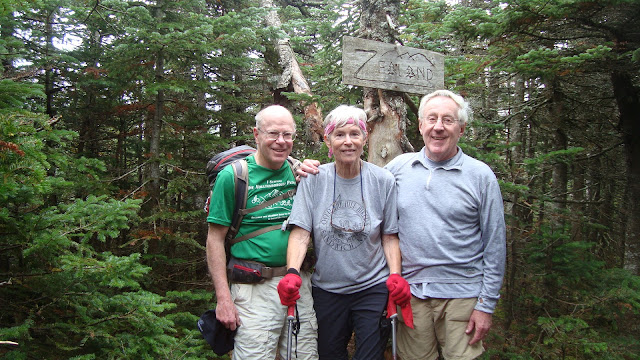 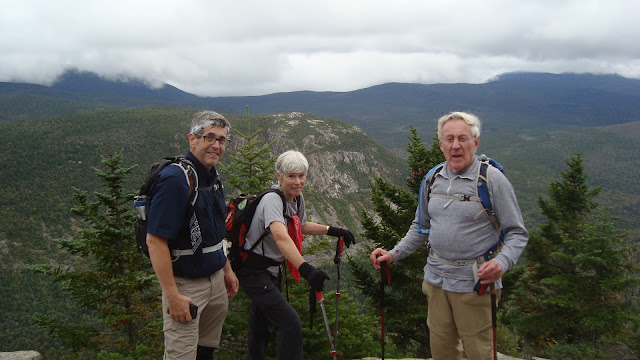 Posted by Over The Hill Hikers at 9:52 AM No comments:

Taking advantage of weather, Dick did Mt Eisenhower solo, closing out his fourth round of the 48. Weather was great for the hike. Below is the view south from the barren summit. 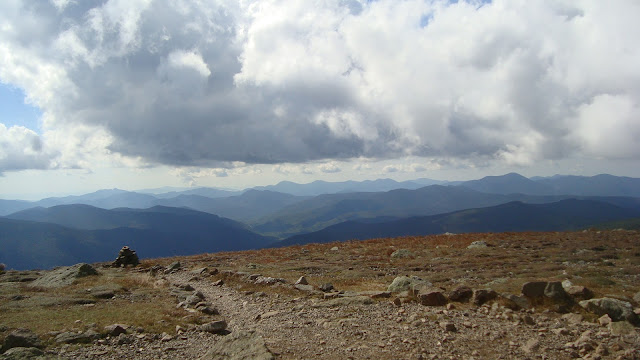 Posted by Over The Hill Hikers at 5:14 PM No comments:

Ellen and Sharon left Lincoln Woods early for the long trek up to the bridge, left up to Franconia Falls, through the "Fisherman's Bushwhack" to skip two crossings and about a mile of trail, and finally up to where the side trail goes up Owls Head itself. At that point, they were about seven miles in from the highway. The "trail" up the side of Owls Head is basically a loose rock slide going up a couple thousand feet in a mile or so. For part of that, there are nice views westward of the "back side" of the Franconia Ridge. The trail disappears into the trees again, tops out on the ridge, and continues another 0.2 mile to the "true summit." Meanwhile, Dick and Susan followed the same route in and caught up to Ellen and Sharon up top. Then it was back out the way we went in. What a long day that was. Below is Susan where the trail first tops out, then Ellen and Sharon back down at the bottom of the junction with the Lincoln Woods Trail. 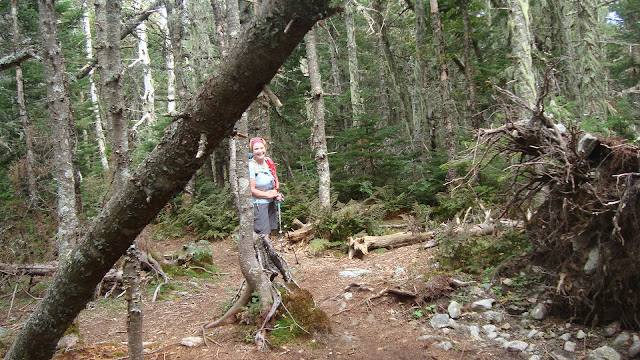 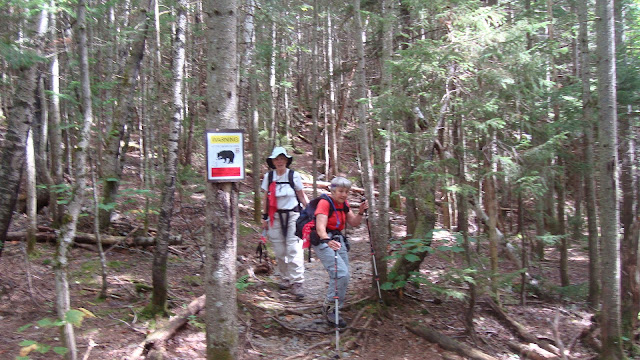 Posted by Over The Hill Hikers at 5:09 PM No comments:

On September 4, Ellen and Sharon hiked in the Gale River Trail to the Galehead AMC hut, did the short trip up to Galehead, and back to the hut for the overnight stay. Meanwhile, Doug went in the North Twin Trail, did the Twins, went down to the hut and also bagged Galehead before spending the night at the hut. The next day, Ellen and Sharon left early, hiked up to South Twin and on southward, picking up all three of the Bonds (West Bond, Bond, Bondcliff). From Bondcliff, they continued down the four miles to the old railroad bed and the final five miles out to the Lincoln Woods trailhead on the Kancamagus Highway. Doug left the hut later than the girls, caught up and passed them, and also did the Bonds on the way out to the Kanc. (no pics available). While the girls and Doug were doing S.Twin and the Bonds, Dick was doing the Twins, solo due to unavailability to do the two-day trip.
Posted by Over The Hill Hikers at 4:58 PM No comments: 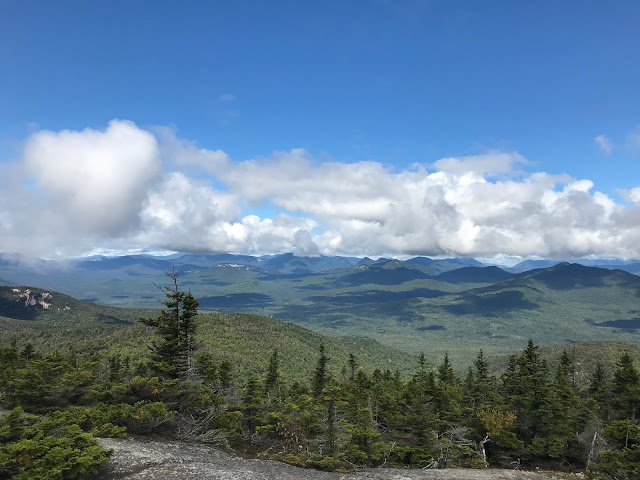 A group of us headed up Mt. Chocorua from the Kancamangus Hwy, taking Champney Falls trail.  We checked out the water fall, then headed up to Chocorua.  On the way down, we decided to add First Sister and Middle Sister, then take the cut off trail to get back over to Champney Falls.  It was a spontaneous decision, but a couple of us needed it for our 52 With a View List, so we figured what the heck.  "We're right here!"  It was a beautiful hike!

Posted by Over The Hill Hikers at 8:44 PM No comments:

Today, a group of five of us set out to hike one of the 52 With a View, Mt.  Pemigewasset.  It was a hot and humid day, seems like we've been having a lot of those lately... but we were all happy to be together and "blow a little stink off us", as my neighbor use to say.

About a 1/2 mile to 3/4 mile up, someone says, "is that Thunder?"  Why, yes it is!  Here, check out the radar!  (a cell phone was passed around). About the same time we all start to hear the rain come in from the background.... we scurry to decide, raincoat or not, put the electronics away, pull out the pack cover, and decide, do we turn around or not.

We ultimately decided to turn around, despite our disappointment of not making the summit.  The thunder was not a good sign, and the rain had no appearance of "lightning" up.

It was a good decision to turn around, although I couldn't help think about the AT hikers that are out there, and how they just "tough it out".  When we got back to the car, we were drenched!  Our boots had puddles of water in them, the clouds were still very dark, and the rain was just as heavy.  I'm happy we're heading home.  The mountain can get climbed another sunny day.


Posted by Over The Hill Hikers at 1:50 PM No comments:

The Turtes climbed North and Middle Sugarloaf on a beautiful day.  John and Ricky, Judy, Terry and Betsy made the climb. 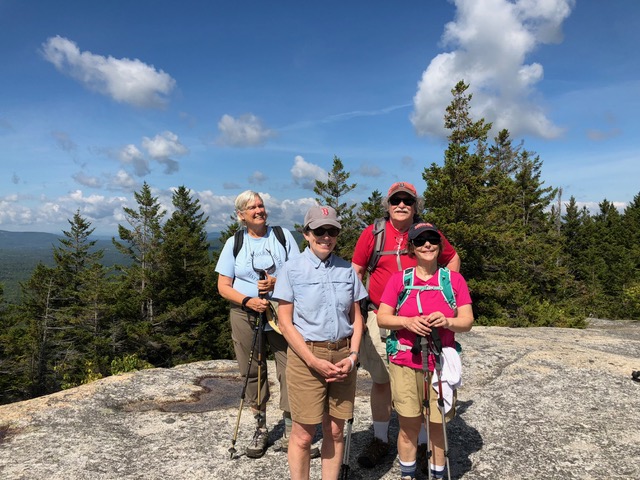 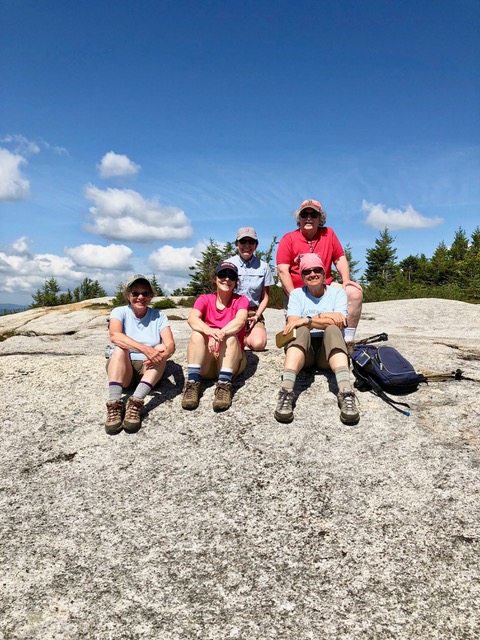 Posted by Over The Hill Hikers at 1:41 PM No comments:

Kayaking on Squam will always make you smile. 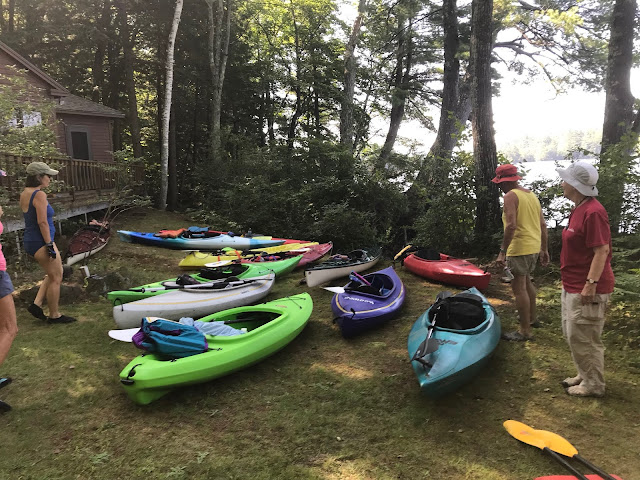 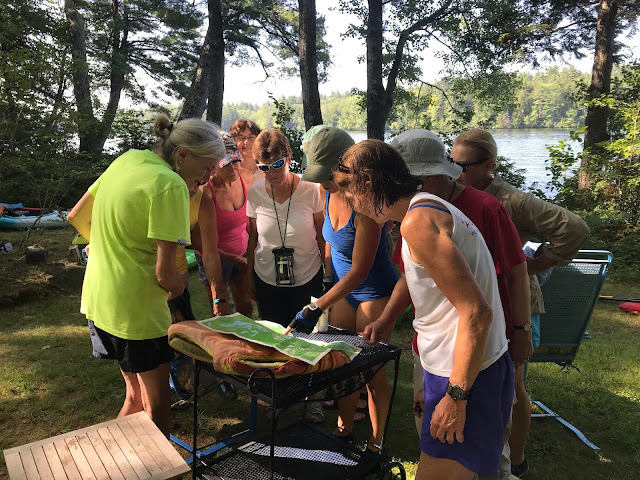 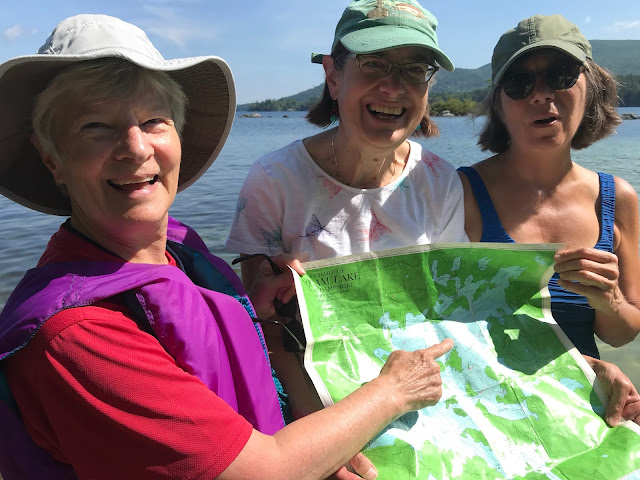 Posted by Over The Hill Hikers at 5:06 PM No comments:

A large group of us tackled Mt. Israel on a HHH morning. Perhaps if we waited a few hours to start after it cooled down, then more than 4 would have reached the summit. It was a successful day for foraging for mushrooms again. This time we collected 3 bags of black trumpets and white lions mane. 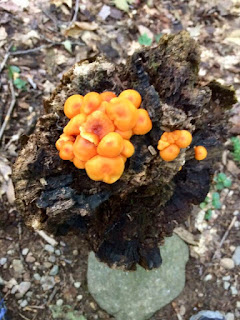 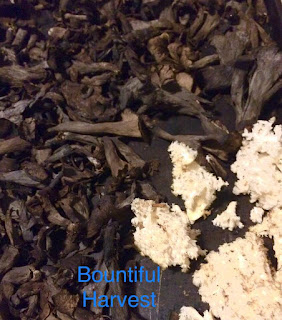 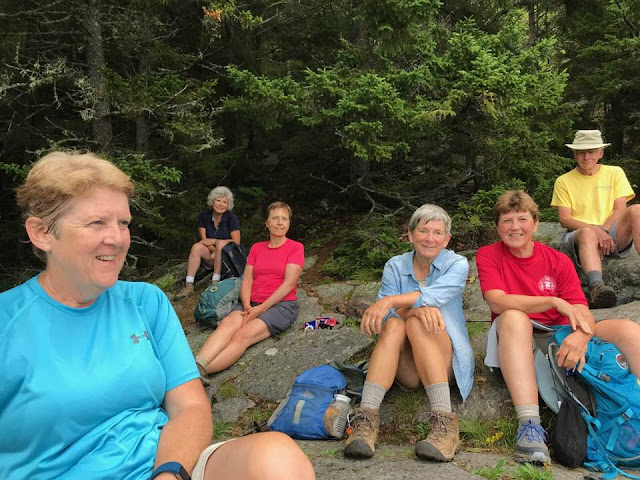 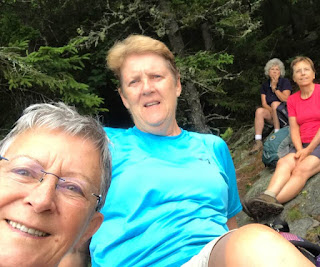 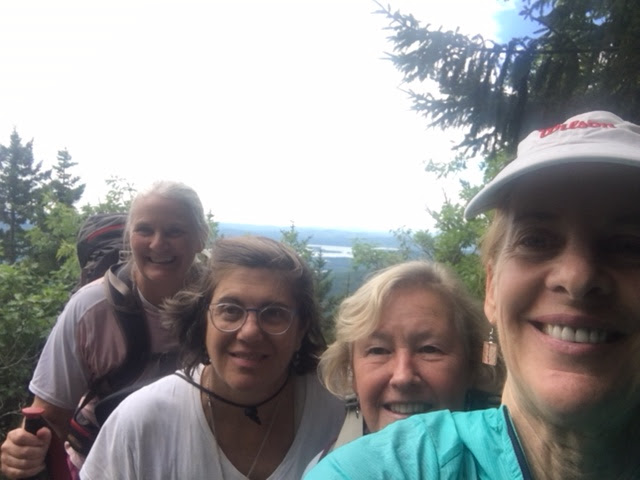 Posted by Over The Hill Hikers at 5:03 PM No comments: